Home » Fashion Trends 2017 Pakistan and India » Lifestyle » You are reading » KARACHI: While diamante sandals and kohla puri inspired chappals may be in vogue everywhere else in Karachi, traditional kohla puris and khussas still retain their old school popularity. One place in Karachi that is still boasting this footwear is the city’s once popular shopping joint Uzma Display Centre, a treat for khussa lovers.

No matter what the season, year or trend, khussas somehow keep ricocheting back into fashion. Talking about this trend, 16-year-old Mohsin Raza who retails khussas at Shoe Point says, “Almost four months back, sales started gaining momentum. The surge in demand was primarily because it was winter and people like their feet covered during the season with a genuine leather product.”

While some say that khussas are the rage every now and then, others feel they’ve always been stylish and are popular amongst buyers. Take for instance, Rida Rajani, a customer at Shoe Point who says, “Fashion circles have never really moved away from khussas and the old style khussas have always stood out. I love wearing traditional shoes — I’m wearing kohla puris right now, but I’m buying khussas for later.”

Shopkeeper Mohammad Zaki disagrees with the view that khussas are fashionable all year long. “Khussas are primarily for the winter season and kohla puri chappals are for the summer,” he says.

At another shop called Khussa Corner, shop keeper Khalilur Rahman explains the two kinds of khussas — one variety that comes from Lahore and the other from Multan.

When asked how to differentiate between the two, Rahman says, “It’s easy to spot the difference. The Lahori ones have mukesh work and the Multani ones have moti work on it.”

On which khussas sell more, he says, “For Lahori khussas, the demand always exceeds supply. The reason for this gap is that there is no strong labour force supporting this industry despite its immense popularity.”

Shopkeepers Raza and Rahman attest that multi-colored khussas in light beige colours which are made out of genuine leather from Lahore have the highest demand.

Talking about the sudden surge in the demand for khussas, Rahman says, “Khussa design and quality have both improved and so people are flocking from everywhere to buy them.”

Regardless of their popularity, political instability in the country has kept the industry from fully flourishing and going international. Shopkeeper Zaki says, “Fear has gripped the general public and uncertainty prevails everywhere. It is hard to make a living in such times and almost impossible for us retailers to save for a rainy day.” 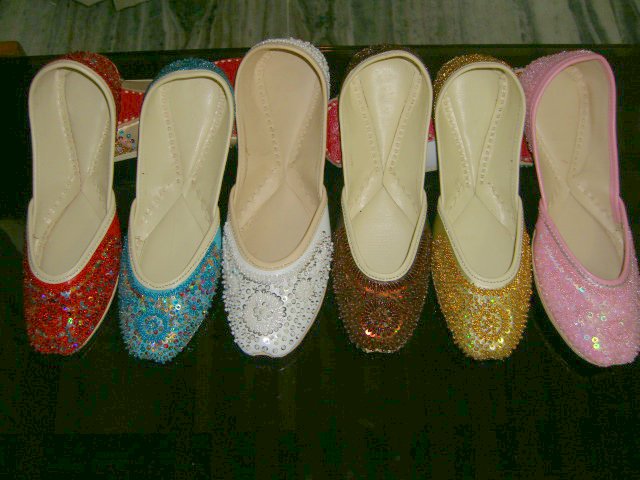